Kathrin Henneberger,  climate justice activist from Germany and member of the European Youth Climate Movement, has written an article on climate change and impacts on women in a global context on the EYCM’s Europe-wide campaigns website “Push Europe.” Read the original blog HERE

Women in developing countries are those most affected by the negative consequences of climate change because of their poverty, their social position and their lesser influence in decision-making structures. This article is written to support the ONE BILLION RISING campaign.

Since the beginning of industrialization, the CO2 concentration in the atmosphere has risen by 40% and is now at the highest level in 800,000 years. The global mean temperature is increasing and the climate is changing with different local effects. Therefore, ecosystems and people are forced to adapt to new environmental conditions. 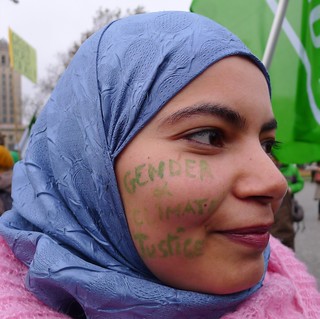 People living in extreme poverty are more vulnerable than the richer part of the world population. If they are also living in environmentally harsh areas, like the Sahel, living on subsistent agriculture or directly depending on the availability of natural resources, then the effects of climate change will be extremely significan

As an example, there were five times more female than male victims when a cyclone hit the country Bangladesh in 1991. The reason for those deaths originated in their position in society. This makes women in many regions more vulnerable to the negative consequences of climate change.

In Bangladesh, the storm and flood warnings did not reach the female population because women have less access to the public space, where the information can be spread. And those, who got the warning, died when following societal rules by waiting for their male relatives to evacuate them.

“Women have a 14 times higher risk than men of losing their lives to natural disasters.”

All in all, women have a 14 times higher risk than men of losing their lives to natural disasters. Furthermore, after disasters they work harder and are more exposed to a greater risks of getting ill. Nursing, securing food and clean water as well as clean-up work is added to the daily responsibility of providing for the family. After natural disasters and emergency situations, the number of violent and sexual assaults against women also increase. It must also be added that violent land use conflicts within and between countries are amplified and triggered by climate change.

Women in poor countries have a higher risk of acquiring diseases and being undersupplied because they are structurally disadvantaged in the distribution of resources such as food and medicine. Climate change makes this situation worse. With the temperature increasing and change in weather conditions in some regions, infectious diseases like malaria and dengue fever are spreading. Even in industrialized countries, women suffer more from climate change. During the European heat wave in summer 2003 more women than men died in every age group.

But especially Africa and Asia will be negatively affected by climate change. According to the IPCC, in the next 15 years the income from agriculture in parts of Africa will halve. In addition, the developing countries do not have adeqate finance and infrastructure for adaptation measures, so that an increase in weather extremes such as droughts, floods and storms affects local people in particular. In many of these regions, a decrease in water availability and crop yields will increase the work pressure on girls and women taking care of their families. The women`s responsibility is the cultivation and harvest of staple foods, organizing water and energy, taking care of children and the elderly and generatinge income. If agricultural productivity decreases, they will be forced to work longer in the fields. If the availability of clean water decreases, the women will be forced to walk further distances to get water.

“Women are the provider of their families, but they have less influence in the political system and less control over the access to resources.”

With an increasing amount of work the health risks of women will rise further and they will have less time for education and political participation. This is the next big problem climate change will aggravate. Women are the provider of their families, but they have less influence in the political system and less control over the access to resources. They are discriminated in land rights and access to technology, finance and information. Their lower access to infrastructure and state services like social security systems results in women being still more dependent on natural resources. As well as, on the basis of their lower education, many women do not possess sufficient information about the impacts of climate change in their region. On the other hand, they know more about the possibilities of adaptation like cultivate other plants on their fields.

At UN Climate Change Conferences is hardly any discourse about the increased concern for women in developing countries. To ensure international climate policy is based on justice and linked to development policy, it is necessary and urgent to discuss the special needs of women. To solve the problems, women – especially from affected regions – have to be heard and involved in negotiations. Measures for adaptation and protection can only be effective if they are not dominated by a male point of view and if they address the needs of the entire population.

There already exist some local projects in which women plant vegetation against desertification and adapt their agriculture. But as long as women are still under-represented in national and international decision-making structures, the impact of the climate change will hit them hardest.

This article is written to support the ONE BILLION RISING campaign.

ONE BILLION RISING FOR JUSTICE is a global call to women survivors of violence and those who love them to gather safely in community outside places where they are entitled to justice – courthouses, police stations, government offices, school administration buildings, work places, sites of environmental injustice…. It is a call to survivors to break the silence and release their stories – politically, spiritually, outrageously – through art, dance, marches, ritual, song, spoken word, testimonies and whatever way feels right.