VOICES begins with listening. In the lead up to the artistic piece, Aja Monet has hosted The Virtual Listening Tour on VOICES’ Instagram Live. It’s an expansive series, featuring conversations, performances, and offerings that will encourage and inspire Black women from all across the African diaspora to submit their stories, poems, and art to VOICES and demonstrate how those in solidarity can engage with the project. Tune in at instagram.com/visforvoices.

“Folklore is the arts of the people before they find out that there is any such thing as art.”
– Zora Neale Hurston

For centuries, Black and indigenous people have passed down stories across generations. From bedtime stories, to stories told on corner blocks, the stories we have told one another have often sustained our lives amid strong colonial violence, becoming our guiding lights in the darkness.

In the aftermath of the white fascist presidency, one that denied Haitian immigrants their right to refuge under TPS, what are the stories of possibility we need right now? What can we learn from our Haitian sisters, descendants of the Haitian Revolution, priestesses of ancestral magic? How do we preserve and stay close to our sacred tradition of oral storytelling?

Edwidge Danticat is the author of several books, including Breath, Eyes, Memory, Krik? Krak!, The Farming of Bones, and Everything Inside. She is the editor of The Butterfly’s Way: Voices from the Haitian Diaspora in the United States, Haiti Noir, and Haiti Noir 2. She has written seven books for young adults and children: Anacaona, Behind the Mountains, Eight Days, The Last Mapou, Mama’s Nightingale, My Mommy Medicine, and Untwine, as well as a travel narrative, After the Dance, A Walk Through Carnival in Jacmel.

“The function of art is to do more than tell it like it is – it’s to imagine what is possible.” – bell hooks

In times of instability and insurrection, artists go to work. How can we use film, television and theater as avenues to spark necessary conversations, raise consciousness, and imagine a world that protects Black women and all life on earth? What can performance and theater teach us about listening to each other? These are the times we are called to use our gifts to tell the truth about this moment, and invite all people to dream of a world rooted in love and care.

Join us on Monday, January 25 at 1:30pm PST as we sit with Longtime V-Day activist and former V-Board member Kerry Washington to Imagine Another World, and discuss how storytelling can help get us there.

Emmy-winning, SAG, and Golden Globe-nominated actor, director, producer, and activist Kerry Washington is a versatile and fearless multi-hyphenate who continues to astound with the depth of her talent. A native of The Bronx, New York, Washington has received high acclaim for her work in film, television, and theater. Washington received widespread public recognition for her role as Olivia Pope on the hit ABC drama Scandal, breaking barriers by becoming the first African-American woman since 1974 to headline a network TV drama. Over the course of seven seasons, Washington earned two Primetime Emmy nominations, a Golden Globe nomination, a SAG nomination, and two NAACP Image Awards for her leading role on the Peabody Award-winning series.

Washington’s performances over the years have received many accolades, including nominations for the Independent Spirit Awards, People’s Choice Awards, MTV Movie Awards, and wins for the BET Awards, and Teen Choice Awards. Washington’s film credits include: Cars 3, Django Unchained, Ray, The Last King of Scotland, Save the Last Dance, Lift, For Colored Girls, Night Catches Us, Peeples, The Details, Mother and Child, Life is Hot in Cracktown, Lakeview Terrace, Miracle at St. Anna, Fantastic Four: Rise of the Silver, I Think I Love My Wife, The Dead Girl, Fantastic Four, Mr. & Mrs. Smith, and Our Song.

Washington is a lifelong advocate and activist. She is dedicated to using her voice to support a healthy and fully participatory democracy by ensuring that all eligible Americans—particularly those who have been historically underrepresented—are engaged and empowered to affect change in their community. Kerry has performed in The Vagina Monologues, including in V-Day Harlem at the Apollo Theater, as well as numerous benefits and events.

Black Women: Do you have a story to tell? This is a call for submissions of poems, monologues and visual art made by Black Women for all women and those who love us. Voices is a poetic performance piece and artistic campaign. We are inviting all Black women around the world to join us in the creative process by calling for submissions.

We welcome all poems and artwork that speaks to our hurt, our hope, and our wisdom. Poems that cast spells and poems that animate the future we know is possible. We want paintings, portraits, collages, and illustrations that establish our visions for a world where we are heard. What are our examples of sisterhood? What is our call to action? Tell us with your writing, songs, poems, drawings, paintings.

VOICES is taking submissions until 14 February 2021.

Artists whose work we accept will receive compensation of $1000 for their participation. SUBMIT at visforvoices.com and tag a sister you wanna see submit. 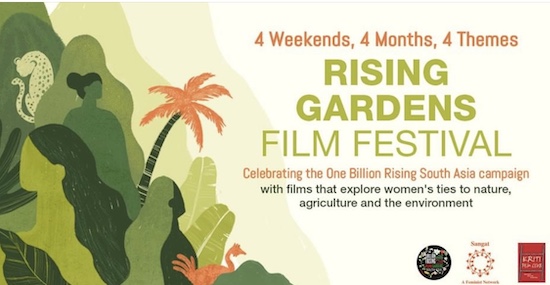 One Billion Rising South Asia, Sangat, and Kriti Film Club have collaborated on the Rising Gardens Film Festival. The festival has 47 films from 10 different countries and explores the ties of women to nature, agriculture, and the environment. Curated by Reena Mohan, these films will explore influences, issues and ideas shaping our experiences, offering new perspectives on the contemporary world.

The online film screenings will be spread across four months – one weekend every month – from January to April 2021. Four weekends, four months, four themes including: women and nature (Cosmic Connections), women and agriculture (Fields of Sorrow, Fields of Hope), women and food (Community and Sustenance), women and solidarities (Moving Mountains). These will be accompanied by monthly discussions.

All movies will be screened HERE
REGISTER HERE for the future screenings and updates.