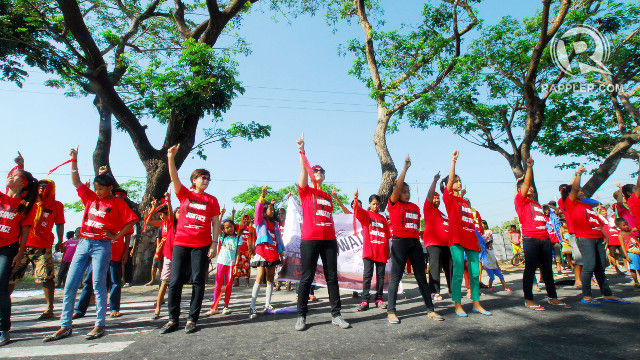 Dressed in red, Wilson and around 300 peasant women and farmers danced the “One Billion Rising” steps at the entrance of Subic-Clark-Tarlac Expressway (SCTEX) near the hacienda, a 4,500-hectare piece of agricultural land which the Supreme Court ordered to be distributed to farmers under the country’s agrarian reform program.

“One Billion Rising” is a global movement fighting violence against women. This year’s celebration had justice as its theme.

The event began with a solidarity program at the covered court in the village of Balete. From there, the parading participants walked around 500 meters to a Tarlac Development Corporation (TADECO) guardhouse.

TADECO is owned by the powerful Cojuangco clan which managed to save Hacienda Luisita from distribution until the SC decision. President Benigno Aquino III is a part of the Cojuangco family but divested his shares of the estate in 2010. TADECO is still claiming hundreds of hectares in the hacienda.

Some armed personnel warily followed the parade, Wilson told Rappler. But instead of hearing the usual angry shouts and stomping of feet by the peasant women, the guards saw dancing.

“When they saw us dancing, they didn’t know what to do. The women were dancing but they were also laughing and shouting. It was really empowerment for them. There’s this collective spirit that was a big deal for them,” the actress said.

Around 80% of the people affected by recent demolitions and displacement of farmers in the hacienda are women, said Wilson.

“Women have a vital role in agriculture. Aside from taking care of children at home, they give support to farmer husbands,” said Lita Mariano of the peasant women group Amihan.

Land grabbing and displacement of farmers is a form of economic violence against women, something the One Billion Rising movement is committed to fighting.

Wilson saw for herself the cement wall built by TADECO around some 200 hectares of land. Guard posts have been installed in different parts of the area. (WATCH: Luisita: The promised land)

TADECO maintains that particular piece of land was not among the parcels of land the Supreme Court ordered distributed. The company already accused some farmers of illegally occupying the land.

Spread out on the cement walls are large tarpaulins that say, “Development soon to rise.”

But Wilson says: “It’s people who should rise. If you give them land, rice, food, you’ll make a much better society. If farmers have to fear at night that they will be forcibly removed, what kind of society is that?”