One Billion Rising and thinking out loud: On Sex Education and the Dreaded M word

I recently wrote a paper for a southern African journal of feminism and although I am not at liberty to share the contents of the article on my blog, there is one nagging issue that research for this paper brought to the fore. It is the issue of sex education in young people.

One Billion Rising was a campaign that sought to bring the issue of violence against women front and center of discourse and to bring it out from under the umbrella of feminist issue to a humanist issue. This I firmly believe is the only way in which violence against women will be eradicated; when it becomes a human rather than a women’s issue. In other words women may be at the fore front of campaigns to end rape and domestic violence, however men need to be visible in this fight in huge numbers. In fact, I am now of the firm belief that women can find quick ‘band-aid’ type solutions to the problem of the violence that threatens to annihilate them, but I believe it is men who will ultimately push the frontier so that violence becomes an anomaly rather than a cultural norm.

In thinking about the issue of rape, it also occurred to me as I wrote this paper that sex education is practically non- existent. By this I mean that an education that seeks to assist girls and boys in understanding that they are sexual beings, and that sexual activity is supposed to be pleasurable to both men and women does not really exist. 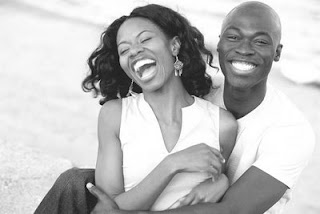 For example in initiation ceremonies across the globe, young women are taught that they are to be good wives and that their bodies are for the sole pleasure of their future husbands. In fact many have no idea what their external (let alone internal sex organs) look like or what each part is for.Girls are not taught that their bodies, the vagina, with its glorious nubbin of millions of nerve endings called the clitoris, are actually there, not for some boy or man to take pleasure from, but for themselves as girls/women to give themselves pleasure. 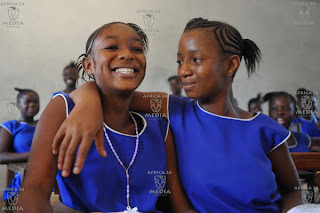 The media bombards girls with images and story lines like: “10 ways to keep your man begging for more”.  The result is that many girls truly believe that in order to be popular they must give the best oral sex to boys (yes here in the States girls as young as 11 have been caught giving oral sex to boys on school buses and feeling very pleased with themselves for delivering “the best service”).  The topic of masturbation is one which even in so called liberal societies still make people cringe. But I would argue that if young women were brought up to be totally comfortable with their bodies and also to know how to pleasure themselves, we might have less of the martyr-esque sexual liasions that young girls often find themselves engaged in, all for the wrong reasons and with awful consequences to their self esteem.

The same would apply to boys, however the standards as usual are different. Boys masturbate and it is an accepted albeit frowned upon (or not openly discussed fact). What would be real education are classes in which boys were taught the anatomy of women and also the fact that sex is not meant as a selfish “let me get mine “ act, but a give and take in which they should consider the satisfaction of their partner. If boys were taught to view girls as human beings with the same sexual urges as they have and to understand that sex is more fulfilling when it is reciprocal, I like to think that we would have less violent sex towards girls and less degrading scenarios in which girls are used as sperm receptacles and nothing more.

What one would then hope to cultivated in young people is a mutual desire to see the other fulfilled and therefore sexual experiences that take into account what another might find unacceptable, desirable or downright painful.

My point is this: we cannot teach young people what rape is unless and until we teach them what is NOT rape. Until there is a clear understanding that women are sexual beings with the same needs and desires as men, then the culture in which women are brutalized for male satisfaction will continue. Until a woman understands that it is critical that she knows her body and knows what turns her on before she places herself in the hands of another, then she is at risk of becoming victim to what the other thinks is good sex, and this is a standard over which she will have no control.

Until boys are socialized to see that it is normal, acceptable and desirable to show an open interest in issues affecting women, then we continue to breed men who have no understanding of what it is to be a woman and therefore have no empathy for what women need or do not want. Until society stops mocking and vilifying boys for enjoying what are considered feminine pursuits and until society breaks down the gender stereotypes that define maleness as aggressive, non-crying, non- emotional, hard and tough, then women will always be vulnerable to men who do not have the ability to step into their shoes and get a feel for what violence does to a woman. Until society stops creating these gender distinctions whereby “girls cry, girls are weak and fragile”, then once again women remain vulnerable to the brutish boys we are breeding. 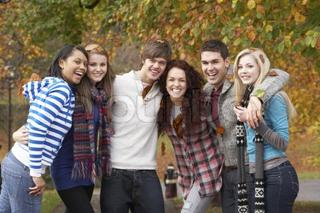 I think one of the most important issues to come out of the OBR campaign is that of authentic sex education, and initiation rituals that edify and strengthen the position of girls rather than weaken and cripple them, rendering them victims before they have even begun their sexual lives. Female genital mutilation is one such initiation practice and it has to GO!! It serves absolutely no purpose other than to remove that which would give a girl or woman sexual pleasure, thereby denying her this basic and fundamental biological right forever. There is nothing more heart breaking than to meet a woman of my age who has had 3 children but has never had an orgasm, or even a tremor. There is nothing more demoralizing than to meet 17 year olds who dread their first sex act because they have been infibulated and live with a visceral fear of marriage and bearing children. I meet these women every week and every week I hear variations to the same horrific stories about lives damaged by FGM. 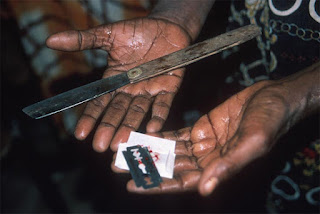