In the News: Guyana Reports on the local Rising

V-Activists have sent in some incredible photos from their events in Guyana as well as two articles that covered the risings! A call for improved education for young girls was among a number of improvements mentioned when over 40 non-governmental organisations (NGOs) joined the international cry opposing violence against women at the One Billion Rising event yesterday.

One Billion Rising, which was first held on February 14, 2013, saw one billion persons in 207 countries joining together to support women’s rights. Guyana’s involvement in the event was organised by the Stella’s Sisterhood of Support and Service (S4) and was backed by a number of NGOs in solidarity, including Food for the Poor Inc, the Peace Corps, and ChildLink. Dancers of the Flash Mob group come together to show their support for the One Billion Rising event held yesterday.

At yesterday’s event at Parc Rayne, Rahaman’s Park, East Bank Demerara, Melinda Janki, of the Justice Institute of Guyana, said justice demands that every woman in the land gets the chance to be the best she can be. Education, she said, plays a central role in girls achieving their full potential.

“How many women are living a life of fear, of poverty, when they have the magic to be poets and philosophers? Budding scientists, musicians, artists, educators….how many never get the chance to be? Our girls have a right to education,” Janki said.

She added that when these young girls achieve their full potential, they are capable of taking control of their lives when they become women.

Janki also revealed that 29 women were murdered last year in Guyana by their husbands and partners. These men, she said, need to realize that women are important and deserve justice.

“My dear brothers, I hope you will never forget that the first person to cherish you was a woman… We are your mothers, your sisters, and your daughters; your role is to love us, your duty is to respect us.” she emphasised.

Though men and women have equal dignity, Janki noted that rights were not equal. A young boy reads a message board at the One Billion Rising event yesterday.

Janki used the forum to note a number of shortcomings in the administration of Guyana, not only in the criminal justice system but also from social organisations such as churches. She stressed that there is need for more safe havens to provide abused women with a place of refuge. Though there are some havens such as the Help and Shelter these are not enough, she said. “We women have to demand that the government sets up enough safe houses,” she said. “If they don’t, let them give us back our taxes and we will do it for our sisters!”

She also called on the moral leaders of Guyana to do more when it comes to violence against women by offering protection to the abused.

Imarah Radix, Executive Director of the S4 Foundation, revealed a number of planned initiatives to be embarked on by the organisation later this year.

These plans include building a shelter for abused women with an attached farm. This farm, she said, will provide women with a source of income and meaningful skills that will improve their lives.

S4 will also be advocating for a missing persons’ legislation that outlines the necessary procedures so that justice can prevail.

Radix, who is also a Youth Ambassador, plans to climb Mount Roraima in August with several counterparts to generate awareness on gender equality. S4 will be a collaborative partner in the project.

ACCORDING to global statistics, one in three women – about one billion – will be beaten or raped in her lifetime.
In this regard, Guyanese from all walks of life stood in solidarity with the rest of the world on Friday, demanding an end to all forms of violence against women during the annual ‘One Billion Rising’ observance. The large gathering assembled at Parc Rayne Rahaman‘s Park, Houston, to commemorate the event through poetry, drama, and dance. The event, which was hosted in part by the Sisterhood of Support and Service (S4) Foundation, also provided a forum for individuals and organizations to share knowledge, resource and views on various aspects of domestic violence. 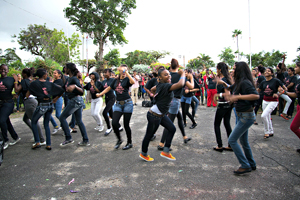 Executive Director of the S4 Foundation, Imarah Radix, told Kaieteur News that a collaborative effort between several organizations helped to make the second enactment of ‘One Billion Rising’ movement in Guyana a success.
“We had a wonderful turn out; it was once again the biggest rising in the Caribbean. We had over 40 organizations from civil society participating in the activity. They brought their banners, information and equipment to give people an idea of what they do and how they can get involved or get help.” Radix noted that textbooks, DVDs (movies), as well as brochures containing information about sexual harassment and domestic violence were also distributed to those in attendance.
Participating entities in last Friday’s event included SASOD, Help and Shelter, ChildLink,  Ptolemy Reid Rehabilitation Centre, Food for the Poor, Peace Corps (Guyana), the Guyana Responsible Parenthood Association , (GRPA)  Caribbean youth environment network,  the Justice Institute of Guyana  and the Ministry of Health.

The inclusion of face painting done by Bravo Arts, and the availability of light refreshments also made the event, fun and educational. The ‘One Billion Rising’ movement was started by Eve Ensler, an American Tony award winning playwright and activist, best known for her play ‘The Vagina Monologues’. Last year Guyana’s campaign was the largest in the Caribbean and brought to the country to the attention of the world.
“It’s a global sensitisation initiative that began over 14 years ago but more importantly it provides an opportunity for local organisations to become familiar with each other’s work …fostering connections between the organisations’ and the public to raise awareness about domestic violence, genital mutilation and rape.” Radix says that S4 outreach work has been extensive and will be expanding. The group is currently focused on empowering women through diversified skills training into non-traditional areas—-Agriculture, healthcare and entrepreneurship. One of Radix’s main objectives is to have a fully operational Women’s Shelter which would be totally sustainable by having an adjoining mushroom farm, while simultaneously providing skills training in the cultivation, harvesting packaging and marketing of the produce.

She says that S4 chides the use of all forms of abuse.
“We’ve provided food, clothing and shelter or basic needs for victims of abuse whether female or male…But because there are so many cases of domestic abuse that are underreported, especially with the taboo of men being raped and abused, we do not limit our resource to helping women. The Men’s Affairs Bureau is basically the only organization in Guyana that speaks to the issues of men so really, there can never be enough. There always need for more assistance to combat violent behaviour.”